Apache Kafka and Blockchain – Comparison and a Kafka-native Implementation

This blog post discusses the concepts, use cases, and architectures behind Event Streaming, Apache Kafka, Distributed Ledger (DLT), and Blockchain. A comparison of different technologies such as Confluent, AIBlockchain, Hyperledger, Ethereum, Ripple, IOTA, and Libra explores when to use Kafka, a Kafka-native blockchain, a dedicated blockchain, or Kafka in conjunction with another blockchain. 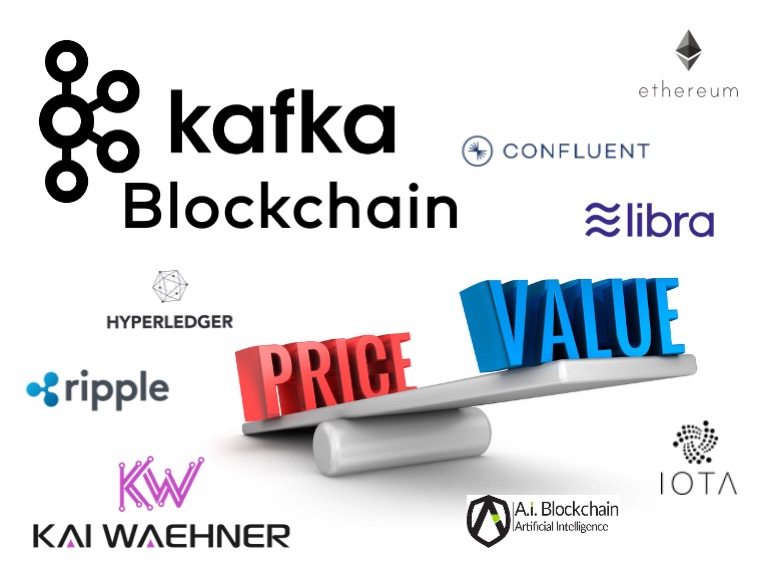 Blockchain is a hype topic for many years. While many companies talk about the buzzword, it is tough to find use cases where Blockchain is the best solution. The following examples show the potential of Blockchain. Here it might make sense:

These are great, valid use cases. But you should ask yourself some critical questions:

Do you need a blockchain? What parts of “blockchain” do you need? Tamper-proof storage and encrypted data processing? Consortium deployments with access from various organizations? Does it add business value? Is it worth the added efforts, complexity, cost, risk?

Challenges and Concerns of Blockchain Technologies

Why am I so skeptical about Blockchain? I love the concepts and technologies! But I see the following concerns and challenges in the real world:

Hence, it is important to only choose a blockchain technology when it makes sense. Most projects I have seen in the last years were about evaluating technologies and doing technical POCs. Similar to Hadoop data lakes 5-10 years ago. I fear the same result as in the Hadoop era: The technical proof worked out, but no real business value or enormous additional and unnecessary complexity and cost were added.

It is crucial to understand that people often don’t mean ‘Blockchain’ when they say ‘Blockchain’. What they actually mean is ‘Distributed Ledger Technology’ (DLT). What is the relation between Blockchain and DLT? 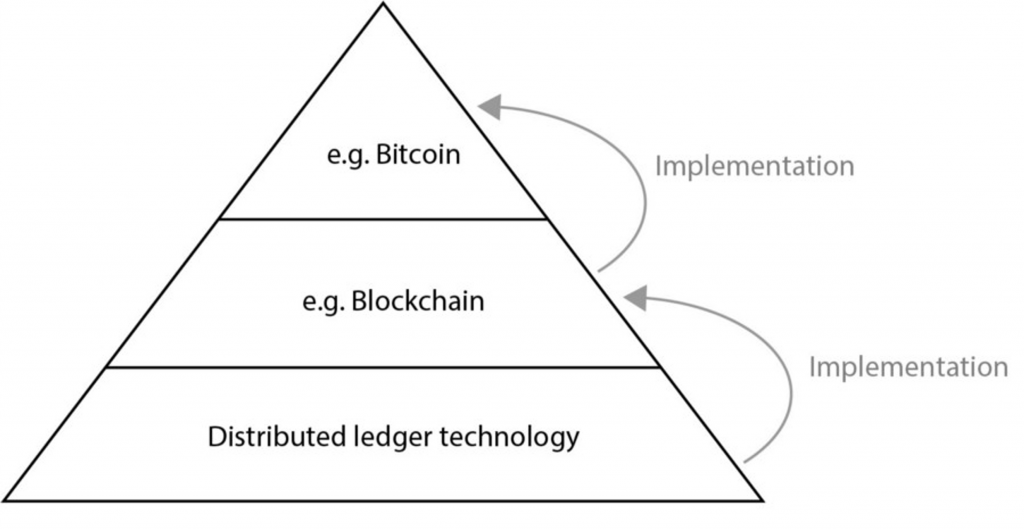 The following explores Blockchain and DLT in more detail:

A blockchain is either permissionless (i.e., public and accessible by everyone, like Bitcoin) or permissioned (using a group of companies or consortium).

Blockchain uses global consensus across all nodes. In contrary, DLT can build the consensus without having to validate across the entire Blockchain

A Blockchain is a growing list of records, called blocks, linked using cryptography. Each block contains a cryptographic hash of the previous block, a timestamp, and transaction data.

Blockchain is a catchall phrase in most of the success stories I have seen in the last years. Many articles you read on the internet say ‘Blockchain’, but the underlying implementation is a DLT. Be aware of this when evaluating these technologies to find the best solution for your project.

The Relation between Kafka and Blockchain

Now you have a good understanding of use cases and concepts of Blockchains and DLTs.

How blockchain and DLT this related to event streaming and the Apache Kafka ecosystem?

I will not give an introduction to Apache Kafka here. Just mentioning a few reasons why Event Streaming with Apache Kafka is used for various use cases in any industry today:

Single Kafka clusters can even be deployed over multiple regions and globally. Mission-critical deployments without downtime or data loss are crucial for Blockchain and many other use cases. ‘Architecture patterns for distributed, hybrid, edge, and global Apache Kafka deployments‘ explores these topics in detail. High availability is the critical foundation for thinking about using Kafka in the context of blockchain projects!

Kafka is NOT a Blockchain!

Kafka is not a blockchain. But it provides many characteristics required for real-world “enterprise blockchain” projects:

These missing pieces are crucial for implementing a blockchain. Having said this, do you need all of them? Or just some of them? Evaluating this question clarifies if you should choose just Kafka, Kafka as native blockchain implementation, or Kafka in conjunction with a blockchain technology like Hyperledger or Ethereum.

Kafka in conjunction with Blockchain – Use Cases and Architectures

I wrote about “Blockchain – The Next Big Thing for Middleware” on InfoQ a long time ago in 2016 already. There is a need to integrate Blockchain and the rest of the enterprise.

Interestingly, many projects from that time don’t exist anymore today, for instance, Microsoft’s Project Bletchley initiative on Github to integrate blockchains with the rest of the enterprise is dead. A lot of traditional middleware (MQ, ETL, ESB) is considered legacy and replaced by Kafka at enterprises across the globe.

Today, blockchain projects use Kafka in two different ways. Either you connect Kafka to one or more blockchains, or you implement a Kafka-native blockchain: 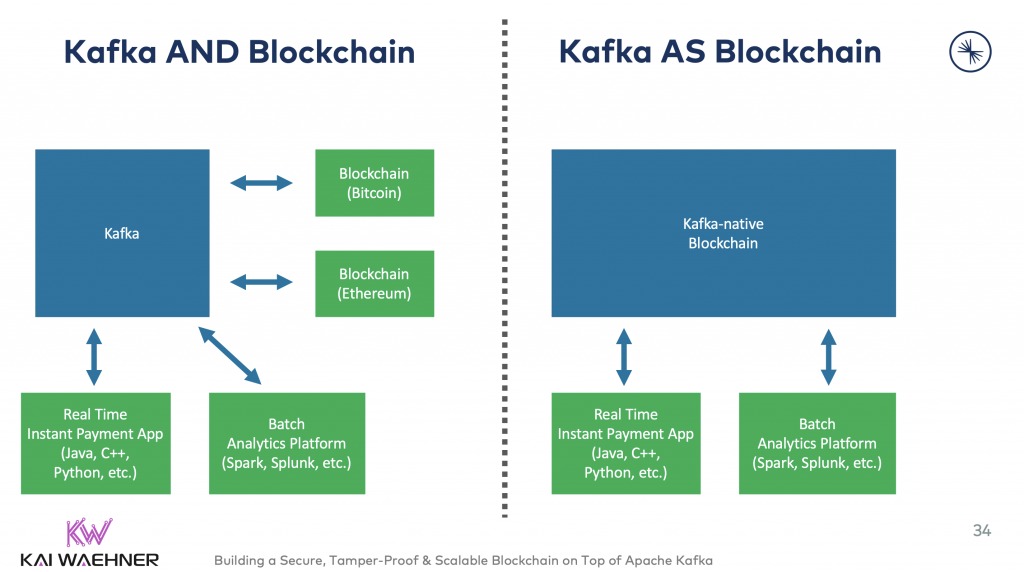 Let’s take a look at a few different examples for Kafka in conjunction with blockchain solutions.

Nash is an excellent example of a modern trading platform for cryptocurrencies using Blockchain under the hood. The heart of Nash’s platform leverages Apache Kafka. The following quote from their community page says:

“Nash is using Confluent Cloud, google cloud platform to deliver and manage its services. Kubernetes and apache Kafka technologies will help it scale faster, maintain top-notch records, give real-time services which are even hard to imagine today.” 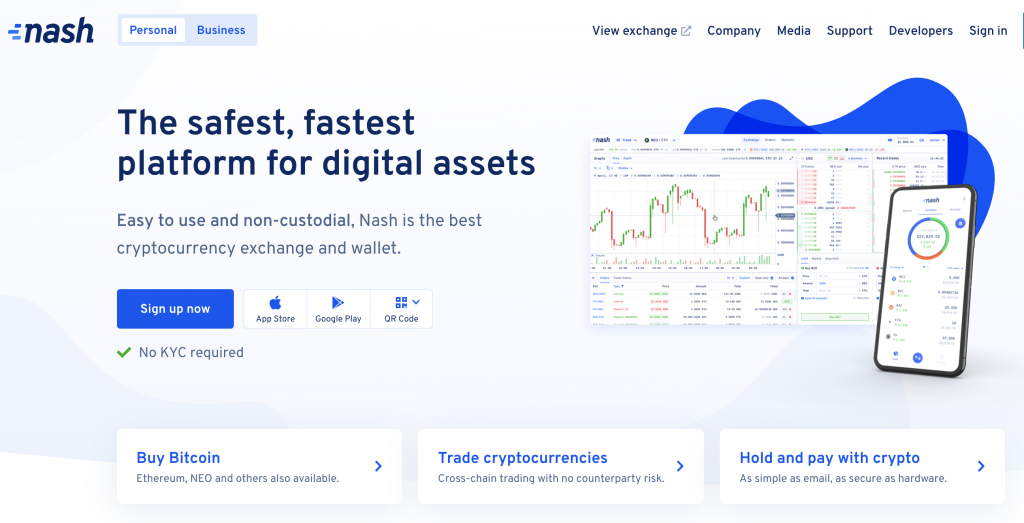 Nash provides the speed and convenience of traditional exchanges and the security of non-custodial approaches. Customers can invest in, make payments with, and trade Bitcoin, Ethereum, NEO, and other digital assets. The exchange is the first of its kind, offering non-custodial cross-chain trading with the full power of a real order book. The distributed, immutable commit log of Kafka enables deterministic replayability in its exact order at any time.

Kafka can be combined with blockchains, as described above. Another option is to use or build a Kafka-native blockchain infrastructure. High scalability and high volume data processing in real-time for mission-critical deployments is a crucial differentiator of using Kafka compared to “traditional blockchain deployments” like Bitcoin or Ethereum.

Kafka enables a blockchain for real-time processing and analysis of historical data with one single platform: 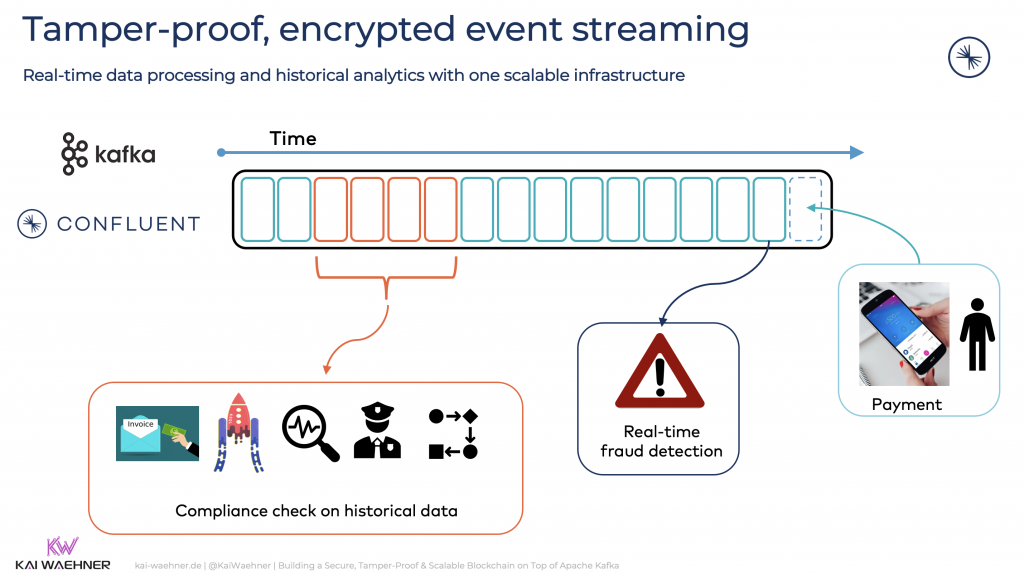 Hyperledger Fabric is a great (but also very complex) blockchain solution using Kafka under the hood.

Ordering in Hyperledger Fabric is what you might know from other blockchains as a ‘consensus algorithm’. It guarantees the integrity of transactions: 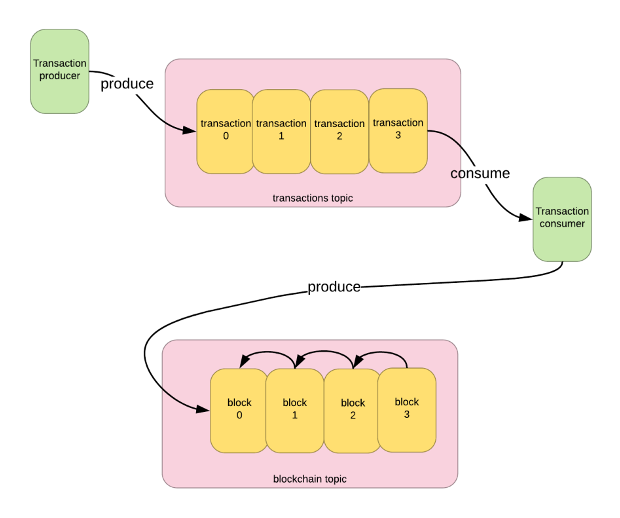 Because blockchains must be strictly sequentially ordered, Kafka blockchain topics must either have a single partition, or consumers for each partition must cooperate to sequence the records: 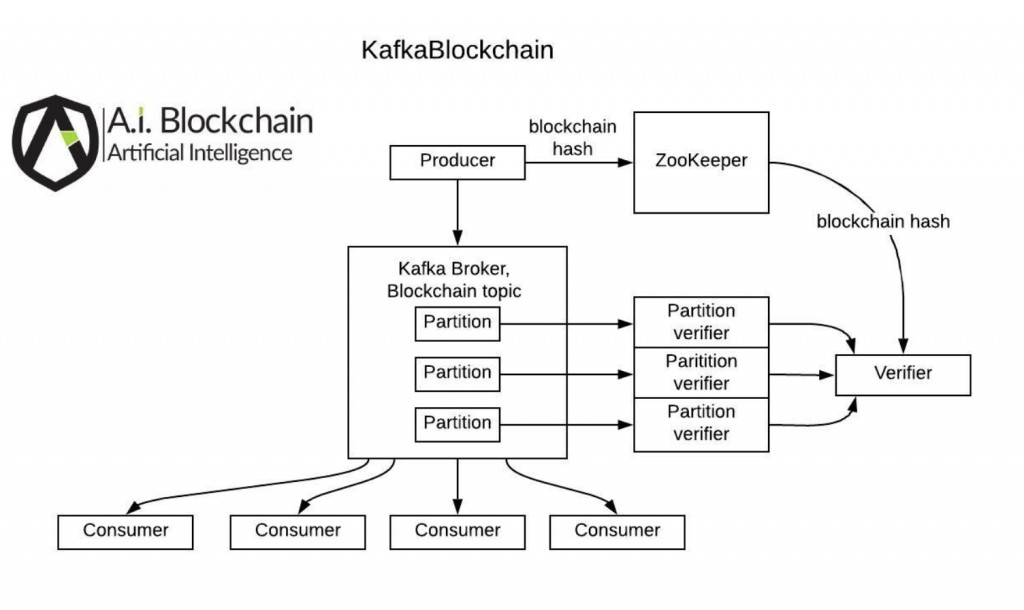 Kafka already implements checksums for message streams to detect data loss. However, an attacker can provide false records that have correct checksums. Cryptographic hashes such as the standard SHA-256 algorithm are very difficult to falsify, which makes them ideal for tamper-evidence despite being a bit more computation than checksums: 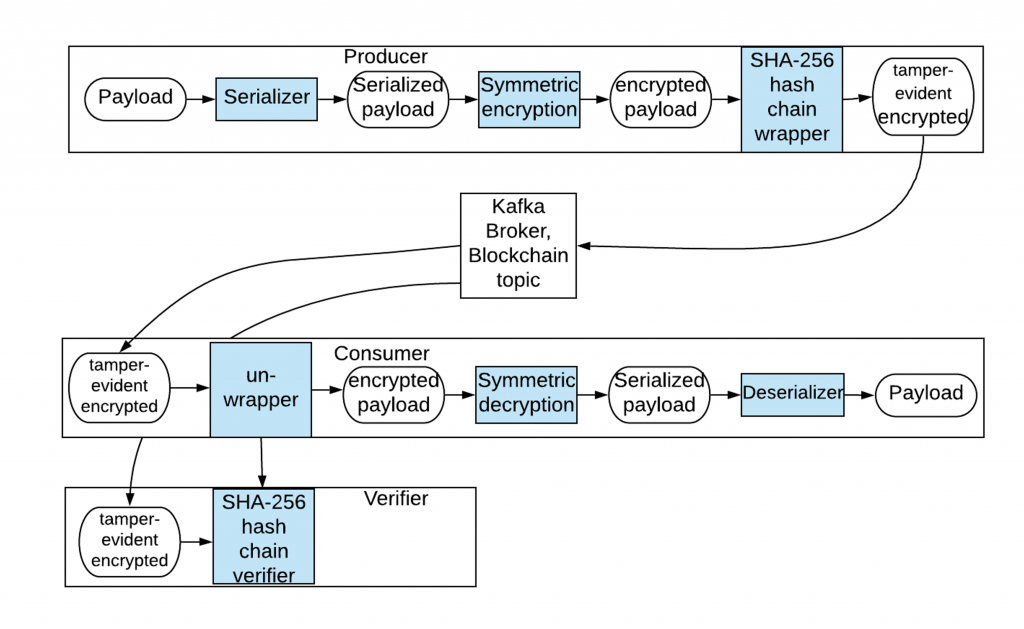 The provided sample in the Github project stores the first (genesis) message SHA-256 hash for each blockchain topic in ZooKeeper. In production, secret-keeping facilities such as Vault can be used.

Please contact the AIBlockchain team for more information about the open-source KafkaBlockchain library, their blockchain patent, and the blockchain projects at customers. The on-demand webinar discussed below also covers this in much more detail.

When to Choose Kafka and/or Blockchain?

Price vs. value is the fundamental question to answer when deciding if you should choose a blockchain technology. 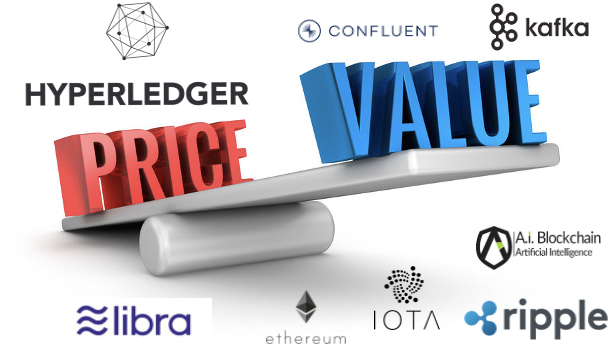 If you consider blockchain / DLT, it is pretty straightforward to make a comparison and make the right choice:

Use only Kafka if you don’t need a blockchain! This is probably true for 95+% of use cases! Period!

Today, Kafka works well for recent events, short-horizon storage, and manual data balancing. Kafka’s present-day design offers extraordinarily low messaging latency by storing topic data on fast disks that are collocated with brokers. This concept of combining memory and storage is usually good. But sometimes, you need to store a vast amount of data for a long time.

Blockchain is such a use case!

(Disclaimer: The following was written in July 2020 – at a later time, make sure to check the status of Tiered Storage for Kafka as it is expected to evolve soon)

“KIP-405 – Add Tiered Storage support to Kafka” is in the works of implementing Tiered Storage for Kafka. Confluent is actively working on this with the open-source community. Uber is leading this initiative. 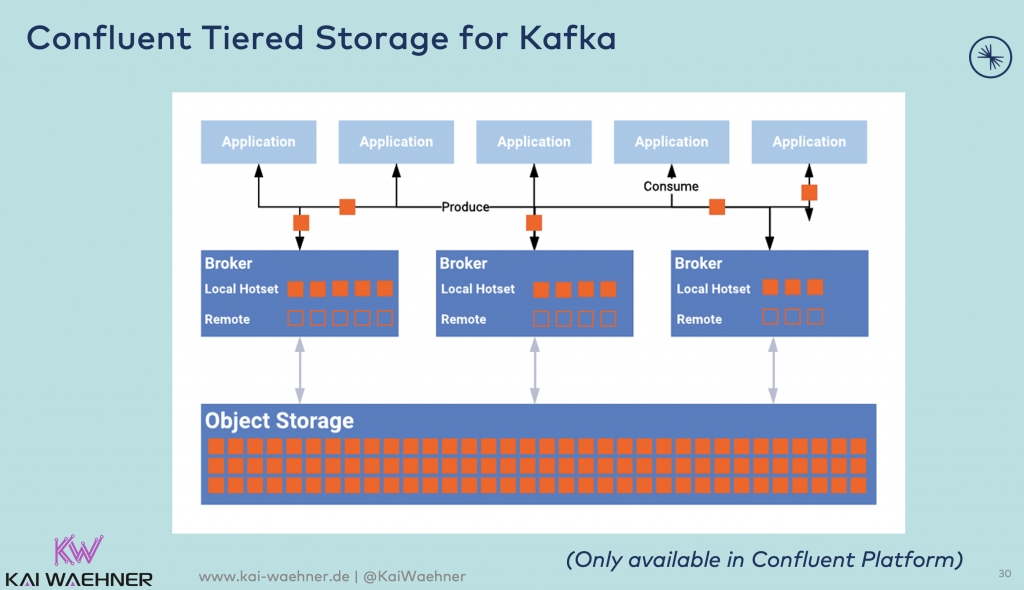 Read about the details and motivation here. Tiered Storage for Kafka creates many benefits:

A Blockchain needs to store infinite data forever. Event-based with timestamps, encrypted, and tamper-proof. AiB’s tamper-proof Blockchain with KafkaBlockchain is a great example that could leverage Tiered Storage for Kafka.

I discussed this topic in more detail with Confluent’s partner AIBlockchain.

Check out the slide deck:

Here is the on-demand video recording: 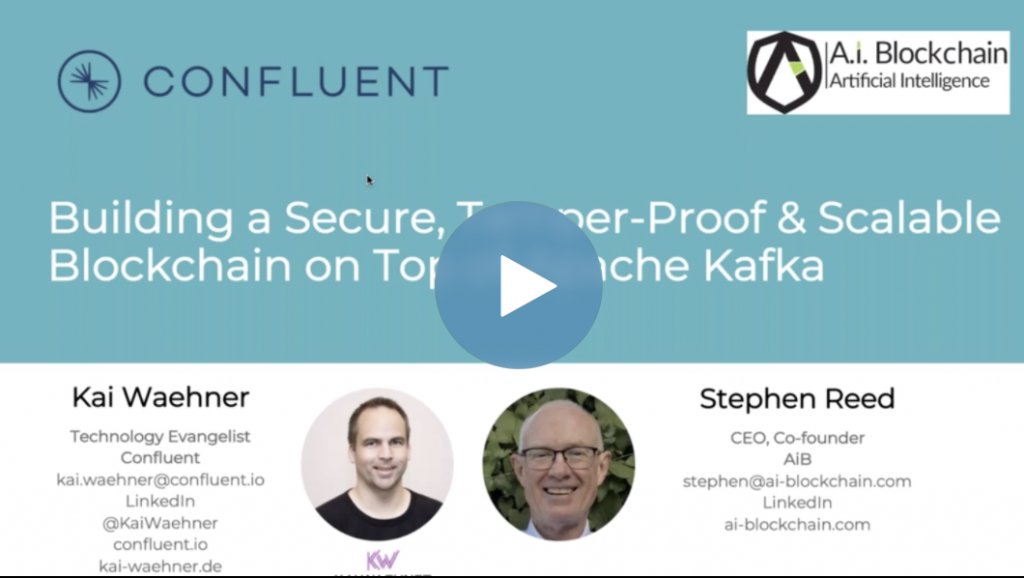 As you learned in this post, Kafka is used in various blockchain scenarios; either complementary to integrate with blockchains / distributed ledger technology and the rest of the enterprise, or Kafka-native implementation.

What are your experiences with blockchain infrastructures? Does Blockchain add value? Is this worth the added technical and organizational complexity? Did you or do you plan to use Apache Kafka and its ecosystem? What is your strategy? Let’s connect on LinkedIn and discuss it! 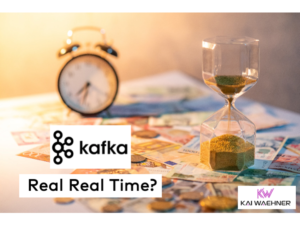 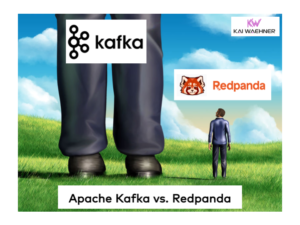 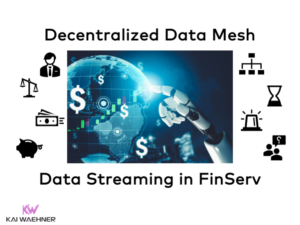 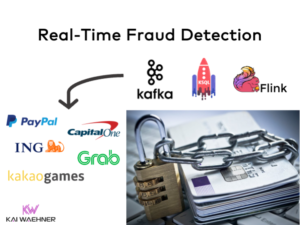