Apache Kafka in the Automotive Industry

In November 2019, I had the pleasure to visit “Motor City” Detroit. I met with several automotive companies, suppliers, startups and cloud providers to discuss use cases and architectures around Apache Kafka. I work with companies related to the German automotive industry for many years. It was great to see the ideas and current status of projects running overseas in the US. 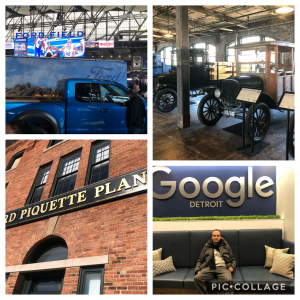 I am really excited about the role of Apache Kafka and its ecosystem in the automotive industry. Kafka became the central nervous system of many applications in various different areas related to automotive industry. Machine Learning also got more and more impact on these use cases.

A Long Journey – From Car Production and Sales to Digital Services

My trip to Detroit started with some private events. First, I watched the amazing football college game of the Michigan Wolverines hosting the Michigan State Spartans in front of 111000 fans in Ann Arbor. The next day I went to the Ford Piquette Plant in Detroit where Henry Ford and his team manufactured the first cars. The Henry Ford Museum was another great visit to learn more about the mastermind Henry Ford and the history of car manufacturing in the US.

The Car Industry is Changing…

I talked to many local people. The main excitement was around three topics in the state of Michigan: Universities, sports and cars. I have to admit that talking about car companies created a much more frustrating and negative mood for many people. They work in the factories and offices of car companies. They were more happy about discussions around sports and universities. Many people are worried about the future of the automotive industry.

Thus, let’s think in more detail about the car business… A car company produces and sells cars. A supplier produces parts for the car. A vendor shop or independent company provides maintenance and repair services.

That was the situation for many decades. Welcome to a new era where car companies have to do much more than just manufacturing and selling cars to stay competitive.

I think people should not be worried, though. This is very exciting. While many old jobs will be done my machines and robots in the future, new tasks and job roles will be created for everybody.

In short, companies in the automotive industry have to change their business model fundamentally to stay competitive. Otherwise, they will become the next “hardware supplier” for a tech giant. This would reduce profit, establish tough dependencies and create market pressure. Even the existence of the company is at risk. No matter if you are on the market for 10 or 100 years, already.

Digital Use Cases in Automotive Industry

The background about the history and new requirements for the automotive industry is important to understand. Every car-related company can add more value and innovation to the own business model.

The use cases can be separated in infrastructure, manufacturing and customer interaction (while there are some overlaps, of course).

A fully connected infrastructure with real time communication is required to build innovative use cases such as:

Producing cars is a very complex task. This includes the production of the car itself (the “hardware”) and the intelligent logic (the “software”) of the car. Both integrate deeply with each other to implement use cases such as:

Connected infrastructures and self-driving cars are awesome. Another added value comes through the possibility to communicate directly with the drivers to provide additional services, for instance:

Wow, this is a lot of use cases for digitalization of the automotive business, isn’t it? And there are many more to come…

Challenges and Requirements to Build Automotive Infrastructure at Scale

Let’s now quickly discuss the challenges and requirements to solve with all those exciting use cases:

This is a lot of challenges to solve. If you know Apache Kafka already well (and maybe also other traditional middleware), then you can probably guess why Kafka is such a good fit here.

Apache Kafka in the Automotive Industry

After we understood the various innovative use cases and its related challenges in the automotive industry, let’s now discuss (quickly) why so many automotive companies and suppliers use Apache Kafka as central nervous system for the discussed use cases.

Car sensors produce data continuously. The more cars you connect, the more data you get. Kafka provides messaging and streaming at scale, providing a reliable, highly scalable infrastructure with zero downtime. Rolling upgrades, backwards compatibility, up- and downscale at runtime, and other features are built-in.

Kafka for Handling Backpressure and Decoupling of Services

Cars are decoupled from the backed systems and mobile apps. Kafka provides storage for backpressure and decoupling of services. It is not just a messaging system! Kafka also stores data as long as you want. For instance, a Kafka topic is stored for a few days for log analytics. Another Kafka topic is stored for years to analyze customer and payment transactions of the past. Order guarantees, timestamps and high availability are provided out of-the-box. Connected applications and data stores can build a materialized view to leverage the data.

Kafka for Integration with Legacy and Modern Technologies

Car data needs to be integrated. Kafka is the backbone for backend systems (legacy like ERP, Mainframe + modern SaaS like Cloud CRM, big data analytics). Connectivity via Kafka Connect provides Kafka-native integration at scale to any legacy or modern technology and communication paradigm. Either directly from Kafka clients or via other technologies as proxy like MQTT to cars, Websockets to mobile apps, via proprietary protocols like Siemens S7 or open standards like OPC-UA to machines in plants). Check out my comparison between Kafka and Middleware (MQ, ETL, ESB) for more details.

Kafka for Continuous Stream Processing with Kafka Streams and ksqlDB

Car data needs to be processed and correlated in real time at scale with other backend databases and applications. Kafka Streams or ksqlDB provide Kafka-native capabilities to do process data continuously, for use cases like Streaming ETL, stateful aggregations (sliding windows) and building business applications with their own state (leveraging rocksdb under the hood – no need for another database.

Machine Learning and Kafka in Automotive Use Cases

Kafka is used more and more in Machine Learning infrastructures. Some examples from tech giants are Uber, Netflix or Paypal. The big challenge about Machine Learning is the deploy at scale in a reliable way (for both model training and predictions). I covered this topic in details in various blog posts, videos and demos. Check out this blog post to get started: “How to Build and Deploy Scalable Machine Learning in Production with Apache Kafka“.

In the Automotive Industry, Machine Learning needs to be applied at scale. Predictions often need to happen in real time. Therefore, more and more automotive-related use cases discussed in the above section leverage Kafka together with Machine Learning for different aspects like:

One huge advantage of using Kafka for Machine Learning infrastructures is solving the impedance mismatch between the data scientist (loving rapid prototyping with Python and Jyipter) and the software developer / production engineer (loving scalable and reliable Java applications).

The architecture for Kafka deployments depends on the use cases, SLAs and many other requirements. Automotive companies and suppliers typically have to think globally:

This is just a quick summary of deployment options for Kafka clusters at the edge, on premises or in the cloud. You typically combine different options to deploy a hybrid and global Kafka infrastructure. I will speak about different “architecture patterns for distributed, hybrid and global Apache Kafka deployments” at DevNexus in Atlanta in February 2020.

For example, you might leverage Confluent Cloud, a fully managed Kafka service with usage-based pricing and enterprise-ready SLAs in Europe and the US on Azure, AWS or GCP. But you need to use Alibaba cloud in China and used self-managed Kafka there deployed to Kubernetes and operated by Confluent Operator. In Russia, no public cloud is available at all. You need to deploy on premises and manage the cluster by yourself. Then you replicate and aggregate some anonymous sensor data from all continents to get new aggregated insights. But some specific user data might always just stay in the country of origin and local region.

We built a live demo (available on Github) to show how easy it is to set up a connected car infrastructure at scale (including a cutting edge streaming machine learning example for predictive maintenance in real time): Streaming Machine Learning at Scale from 100000 IoT Devices with HiveMQ, Apache Kafka and TensorfLow: 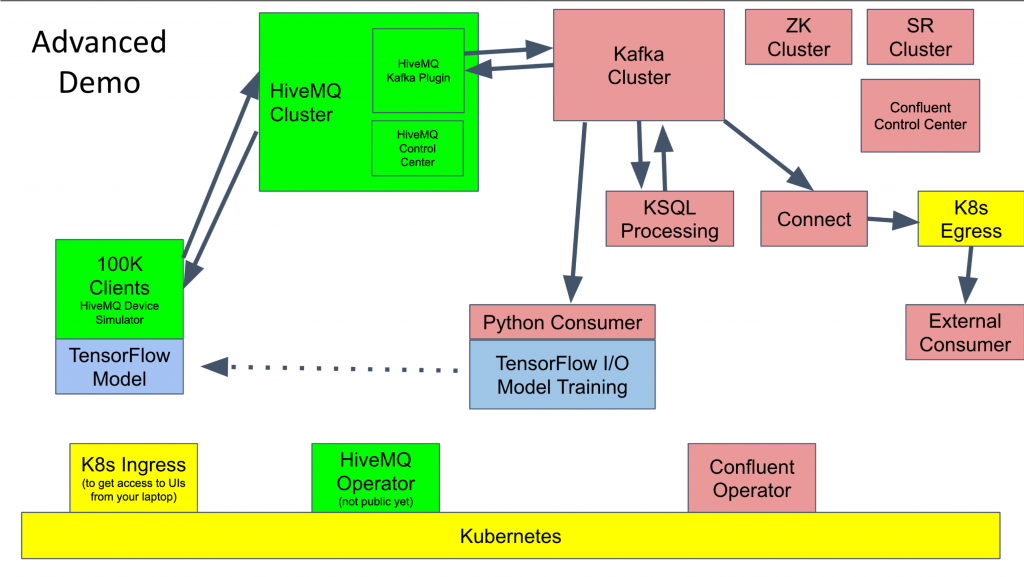 Such a setup can be the foundation for most of the discussed use cases in this blog post.

You can also take a look at the following link to see the slide deck and video recording. They discuss the demo architecture and walking you through the live demo: